Once GPS is built into every car manufactured, along with a constantly displayed speed limit – which is bound to happen sooner or later – we can instate variable speed limits. Since you can drive perfectly safe above 50mph on most 3-lane highways it would make sense to increase the legal speed limit during offpeak times when there’s no congestion, and decrease it when congestion is high and there’s less time/space for reacting to accidents or any reckless driving.

In addition to a decreasing the speed limit during peak times in order to decrease traffic jams and minor accidents, you can dynamically adjust the speed limit based on locally available weather conditions, so that if there’s major lack of visibility or slippery conditions the speed limit would be lowered depending on the intensity of the conditions.

At this point the limit becomes more of a recommendation.

This entire idea is a result of my 6am drive this morning which was just as congested as it would’ve been at 8am =(. I was wondering about the benefits of waking up even earlier, but was dismayed by the fact that even though there would be less cars, I would still have to be breaking the law if I want my commute to be shorter, even though the road is empty and straight. 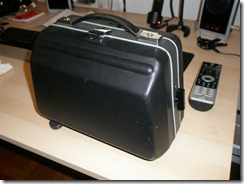 The Accudot™ 300 Laser Bore Sight by Sightmark® provides a convenient and accurate method for sighting in rifles of all types. Simply chamber the bore sight like a regular bullet and a laser dot will show exactly where the rifle is aiming. It’s easy to use and will save both time and money by avoiding prolonged live fire tests at the range. A lightweight carrying pouch protects the laser for convenient use in the field.

update: Aw, it seems Toys R Us took it down =(. There were such positive reviews about 5 year olds and their exemplary use of assault rifles!

Article about David Simon’s (the man behind “The Wire”) new TV series set in New Orleans. While I knew that “The Wire” was a brilliant show, this excerpt came as quite a surprise:

If likening Simon repeatedly to Dickens and Dreiser, Balzac and Tolstoy and Shakespeare hasn’t proved adequately exalting, Bill Moyers lately freshened things up by calling Simon “our Edward Gibbon,” while the literary critic Walter Benn Michaels went so far as to suggest that the beauty and difficulty of watching “The Wire” in English — the multifarious 21st-century English of Baltimore detectives and drug dealers — compares with that of reading Dante in 14th-century Italian. It should go without saying that Duke; the University of California, Berkeley; and, next term, Harvard, are offering courses on the series, seminars focused not merely on the sophistication of its storytelling but also on its sociological and political perspicacity.

It would kick so much butt to take a class like that =).

I… didn’t realize changing a headlight bulb was simple enough that you don’t even need tools to do it. Unless you count a rag for wiping your hands as a tool. Guess I should have looked into it before deciding I have to find a good mechanic and drop my car off for the day. Thankfully dad asked me about it and called me out on my silliness (to politely paraphrase).

Now I don’t have to be worried about being pulled over by the Stony Brook Campus Police assholes and being questioned about my bike in the trunk again!

As a result of some arduous work, all content on the Stony Brook Press website will now be indexed by and searchable with Google News.